Since the 1980s, domestic consumption of milk powder/formula in China has seen a very rapid growth. In 1986, the first year on record, 135,000 metric tons of dry whole milk powder was consumed in China. That may seem like a lot until compared with 2014’s total tonnage of 1.876 million.

There are several reasons behind the development of infant product industry in China: the changes in selective two-child policy, rapid urbanization, and high confidence in China. These changes in policy, economy and lifestyle encouraged people’s preference in convenience-oriented lifestyles, driving baby formula in China, other prepared baby foods, and convenient diapers more desirable.

In the wake of child policy change, Credit Suisse’s forecast assumed ‘application rate’ of around 5% to 10% for 60 million mainland couples. This means as many as 6 million new babies will be born annually from 2017. Further, influenced by the population boost, there will be a demand increase in the most directly related sectors including baby milk formula, diapers, and other appliances. Assuming the cost of raising at 40,000 yuan per year, additional consumption will be 120-240 billion yuan per year from 2017, translating into 4-9 per cent of total retail sales. Also, because of China’s former one child policy, a big family usually has only one child, making the child even more “precious”. The family is thus willing to pay more money for better infant product.

In 2016, a report released by CBNData showed that same as the situation of the whole maternal-infant industry in China, most of the purchasers of infant formula are women. The number is increasing at a steady step. Among the consumers of the infant formula, the group of people that between 29 to 35 years old are the majority. But the number of consumers between 23 to 28 years old is climbing too.

Consumers from China’s tier one and tier two cities were the main contributors of infant formula consumption. Also, the majority of the consumers were from eastern China. Meanwhile, the report from CBNData predicted that for the developing areas in China, online stores would be a very promising way to increase the sales of infant formula and other infant product.

The number of online consumers is increasing constantly, whether in infant formula, diapers, or other infant product. The Nielsen report indicated that 33% of Chinese 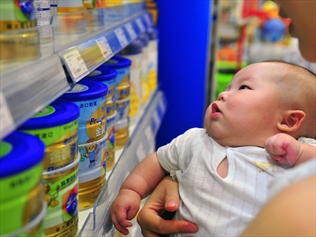 consumers bought diapers online, and 27% have bought baby food online. Several reasons drive this “E-commerce” in China. E-commerce retailers can compete on price and convenience due to reduced capital investment in physical infrastructure. Also, the elimination of links in the supply chain in some cases can also be an advantage. Online also offers a compelling proposition for busy parents— they can shop by a large convenience regardless of the time and place, often with free delivery to their front door. E-commerce retail sales show impressive year-over-year growth in China.

Another new popular way of infant product selling is baby stores. Compared with the traditional sales channel, this kind of stores has more completed product for both mothers and babies, more attractive activates, and more professional service and better experience. Research shows that consumers choosing these baby stores for their better product variety (72%), better product quality (55%), and physical display experience (44%).

Considering the safety of infant milk formula and other infant product. Chinese consumers are more willing to buy diapers and baby food (50%) regardless of the price in their baby food purchasing decisions, compared with consumers in India (36%), Japan (36%), and Australia (21%). Also, Chinese consumers have stronger trust in name-brand (78%) comparing other Asia-Pacific countries.

The most popular diaper brands in China are Pampers (US), Kao (Japan), Huggies (US), and MamyPoko (Japan).

The most popular infant milk brands in China are Enfamil (US), Dumex under Groupe Danone (France), Wyeth (US), and Abbott Laboratories (US).

4. Growth of Diaper is Much Stronger than Infant Formula

Indeed, more babies being born leads to more sales of baby necessities. The growth rate of diaper market reached 12.2% (vs. 4.9% in the previous 12 months), and infant milk formula grew by 5.5%. As mentioned above, Chinese consumers are more likely to buy better infant product regardless of the price. In diaper market, super-premium with higher prices such as Merries diaper and Huggies Platinum diaper witnessed a significantly faster growth than economic or low price diaper. Super-premium products Shoppers were also increasingly willing to try emerging premium categories such as Pull-up Pants.

In conclusion, the market for infant formula, diapers, and other infant product are going to see a promising development as the policy, economy, and lifestyle in China are changing, creating a better opportunity for these related industries.